Effective reduction of body fat – we tell you how!

THE LATEST SCIENTIFIC RECOMMENDATIONS, INCLUDING TIPS FROM SIMON SCHEMPP, THE MOST SUCCESSFUL GERMAN BIATHLETE IN THE WORLD CUP SEASON 2014/15.

Who doesn’t know this scenario: for the optimal preparation for the race season you need to get down to race weight – but what is the most effective way to get rid of the unwanted ‘love handles’ without compromising athletic performance?

There are always reports of new ‘wonder-diets’ in the media that have one thing in common: through restricted or selective choices of food a reduction in the total amount of energy consumed is achieved. The body is supplied with less energy than it actually needs. This calorie deficit is crucial for a reduction in body weight, and there’s no way around this.

A reduction in body weight is typically achieved through the combined breakdown of body fat and muscle mass. Although a high or radical reduction in calories also leads to the biggest weight losses, muscle mass is also attacked more and broken down. However, for athletes it is much more beneficial to maintain / preserve existing muscle mass during weight loss, as it is critical for exercise performance. Therefore, instead of focusing on the maximal (quantitative) weight loss, the nutritional strategy employed should ensure that the most amount of body fat is lost, with lowest possible reduction of valuable muscle mass. In addition to specific (strength/weight) training, the macronutrient protein also plays an important role.

A higher protein intake supports the maintenance of muscle mass during a calorie-restricted diet. However, there are also other reasons why foods rich in protein can be beneficial. For example, studies have shown that the feeling of satiety is higher after the consumption of protein in comparison to carbohydrates or fats. Feeling fuller reduces hunger and appetite, and therefore makes sticking to a calorie-reduced diet easier. Logically, with an increased intake of protein there needs to be a reduction in calories somewhere else to be successful. That means that foods that contain a lot of carbohydrates and / or are rich in fats need to be reduced.

It is important to point out that a diet low in carbohydrates does not allow optimal performance during high intensity activities. For athletes the recommendation is therefore to save calories from a reduced fat intake during periods of high intensity training, or when the aim is to improve the intensity of training. This is also something the German Biathlete Simon Schempp recommends:

“I think getting rid of carbohydrates completely is definitely wrong, and is out of the question for me. During periods of high intensity training the body needs sufficient amounts of carbohydrates – not just during competition, but also during training.”

Schempp was the first ever Biathlete to win both the Sprint event and the Pursuit in Antholz (Italy) in two consecutive years.

During periods of low intensity training and volume it can indeed be sensible to use a carbohydrate restricting strategy for weight loss. In studies, calorie-restricted “low carb high protein” strategies are associated with a higher reduction in body fat. Schempp is already putting the latest scientific recommendations for body fat reduction into practice:

“If I need to lose a bit of weight to reach my race weight I plan my calorie restriction carefully. During periods of high-intensity training I mainly reduce the amount of fatty foods. In contrast, on days where I have easy sessions that are supposed to stimulate fat metabolism, I eat less pasta and bread. But I definitely always make sure I get the sufficient amount of protein. This strategy also works in the long term.”

The timing for body fat reduction is crucial, Schempp explains:

“Any diet should always be planned during periods without any competition. During the racing season I try to maintain my body weight, because during this period it’s much more important to concentrate on the maximal possible performance – physically and mentally.”

AND YES, THERE IS EVEN ADVICE FOR CLEVER “CHEATING”: 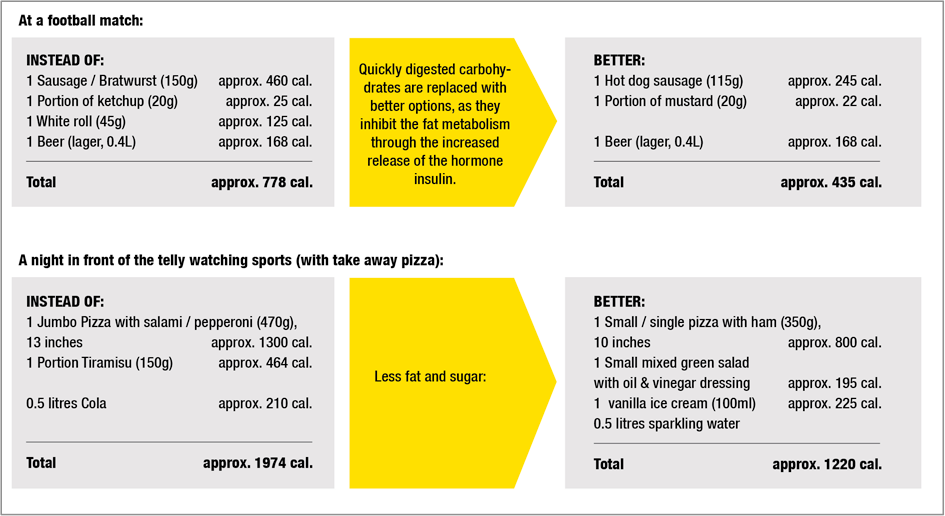 – Krieger J.W. et al. (2006). Effects of variation in protein and carbohydrate intake on body mass and composition during energy restriction: a meta-regression. Am J Clin Nutr., 83(2):260-74.